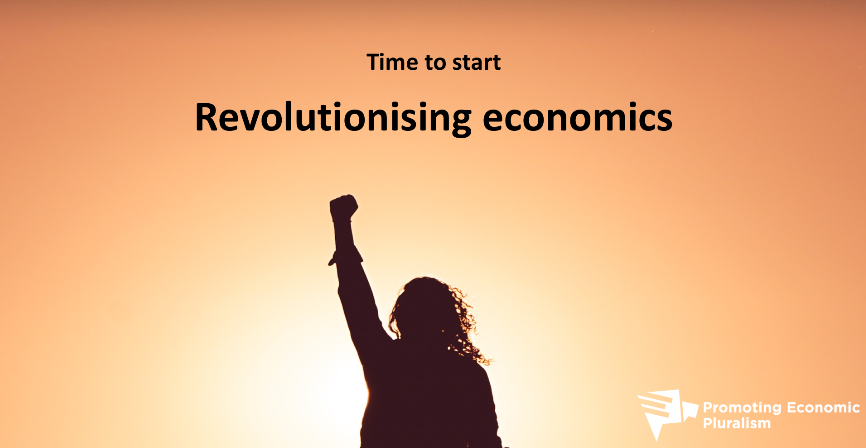 Post the Crash, we seemed set for a revolution in economics. Even The Economist magazine, defender of free markets, concluded that a new economics was needed. Yet we are still waiting! We think the answer is to legitimise the innovators outside the mainstream rather than expect change to come from within.

Following revelations of the extraordinary inadequacy of economic models and the students’ revolt against their economic teaching, many expected a revolution. After all they had happened no? A team of economists recently undertook a systematic analysis of citations pre and post crisis in economic journals. This looked to see if economists were referencing new or different ideas to any greater extent since the Crash. It concluded they weren’t.

Student groups had already concluded that in many leading universities economic teaching was if anything becoming narrower in approach. The one innovation, the CORE curriculum, is clearly more engaging. However it determinedly sticks to teaching economics as if there was only one answer – and the answer is not too dissimilar to the status quo – with no support for critical reflection.

Mainstream economics itself suggests that monopolists will resist competition.

This has real world consequences outside academia. The continuing power of mainstream economics suffocates any new ideas to address inequality, financial fragility and ecological crises. With the recent IPCC report highlighting in even stronger language the unsustainability of business as usual, the need for reform is more urgent than ever. Yet we are still waiting!

Mainstream economics itself suggests that monopolists will resist competition. Mainstream economists are trained in only one form of economics. They control access to and teaching in top university departments. The resistance to change is maybe not surprising.

Reform is not just a technical demand but an emotional one too. One senior and relatively enlightened economist angrily told me earlier this year that I should not tell her that her life’s work had been wasted. I had only been suggesting that economics had to be more pluralist.

Change has though happened in the past albeit not as decisively as sometimes suggested. In response to the depression of the 1930s with capitalism under threat from collectivist ideologies such as fascism and communism, new thinkers emerged, most famously Keynes, opening out the economics debate. However by the 1950s, many of the new elements such as uncertainty and institutions that didn’t fit into mathematical formula, were dropped from the canon. The new synthesis called ‘Keynesian economics’ actually ignored much of Keynes’s thinking, but fitted the new political consensus post war.

Today it seems easier to draw parallels with the 1930s than the 1970s.

Again in the 1970s, another revolution seemed to follow the oil shocks and stagflation. But really one sort of formal mathematical modelling was replaced with another one, a sort of palace coup. The big difference of course was the political implications of the new models. They were in tune with Thatcher and Reagan’s credo of small government and reducing the impediments to market power. This really meant a return towards the Victorian political-economy of laissez faire. It had all the same problems that motivated collectivist ideologies such as fascism in the early 20th century.

History, so they say, never repeats, but it does rhyme. Today it seems easier to draw parallels with the 1930s than the 1970s. There is certainly no new dominant political ideology looking for economists to provide a justification, yet the current crises demand new thinking.

Luckily a lot of the thinking, that got traction in the 1930s on institutions, complexity and uncertainty but were subsequently discarded by mainstream economics, has not been lost. It has been developed and extended in the margins of the economics profession. Furthermore, academics in other disciplines have turned their attention increasingly to socio-economic issues.

We intend to work with these innovators and other stakeholders to build a common identity and most importantly an increased profile outside academia to be able to influence policy and practice.

This disparate group is growing as it draws in new young researchers. Many have been insipired by the students’ movement for curriculum reform and high-profile non-mainstream economists such as Steve Keen and Ann Pettifor. However it is fragmented across disciplines and departments without a common identity. It also has limited traction with policy makers.

We intend to work with these innovators and other stakeholders to build a common identity and most importantly an increased profile outside academia to be able to influence policy and practice.

As a first step, we are doing this by creating an accreditation system for masters courses that take a pluralist approach to economic teaching. This means recognising more than one way of thinking about the economy and encouraging critical reflection at the very least.

So what can you do to support change in these urgent times?

The point of this is not to determine what economics is ‘right’ or which courses are ‘best’. It is to build a shared sense between those inside and outside of academia of what economic teaching looks like that fosters creativity and critical thinking to address real world issues. This type of teaching is already happening in many of the departments and centres where these innovators are as can be seen in the list of courses here. It is happing in the same high ranking universities where the economic departments themselves defend the status quo.

Beyond that you can get involved in actually co-creating this scheme. This doesn’t mean that you necessarily have to get involved in the detail or devote huge amounts of time to it. We will ensure people can give their views on the principles and broad approach as easily as possible. Please sign-up here to be involved and if you first want to find out more, sign up for a webinar here.

We look forward to building this new institution together to support the essential task of organising economies fit for the 21st century.

2 responses to “10 Years after the Crash, time to stop expecting reform from mainstream economists?”