10 years after Lehman, time to get serious in building a new approach to teaching economics - PEP - Promoting Economic Pluralism 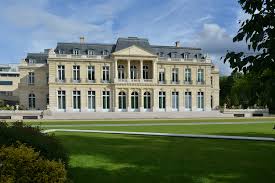 After a few days spent visiting the OECD to mark 10 years after the failure of Lehman Brothers, the task of reforming economic teaching could seem even more daunting. You hear for yourself how this teaching has hardwired neo-classical economics into heads of policy makers.  Some have even lost their ability to converse in normal language.  But for me this just makes it even more obvious that we have to succeed.  We have to break out of this groupthink or our shelf life as a species (or at least a civilised one) is looking quite short.  And we have an approach that with your support we think could succeed.

When you arrive at the OECD, the first thing you notice is the security – after all it is just a thinktank, albeit for all the richest governments.  Not only do you need a passport, but you also need an official invitation. There are two sets of guards to go through at the gate; your luggage is then x-rayed. You then get a laminated electronic pass before being able to get into the main building.

It is a glorious building, a classic French Chateau originally a royal hunting lodge.  In this building academic economic theories have been turned into ‘rigorous’ analysis to underpin the erstwhile ‘new world of order’ of globalisation and finance, markets as the answer to everything.  This elegant chateau is the core of the dominance of neo-classical economic thinking.  As the US Ambassador to the OECD informed the serried ranks of country delegates referencing Mark Twain, ‘the reports of the death of neo-classical economics have been greatly exaggerated’.

However it was hardly an auspicious occasion for people such as the US ambassador, recalling as it did the moment when the economic elite met their waterloo. This event was organised by a small but perfectly formed team in the OECD, the New Approaches to Economic Challenges (NAEC) team. It had been set up some six years previously to introduce new thinking into the OECD following the Crash. It reports to the Chief of Staff and then through to the Secretary-General. It is formally at the core but feels on the fringe. They had invited the heretics in to address the gathering of the faithful – even arch trouble makers Yanis Varoufakis and Steve Keen.

Some-one should invent a prayer: ‘May our utility be maximised, and the invisible hand of the market keep us safe

In truth though the country delegates could only reflect the confusion and disfunction of their own governments.  They were in no position to voice brave new thinking when their masters were not. The presentations of the heretics were politely ignored.  Some got comfort in the face of the increasing chaos around them from repeating the same old economic jargon.  Some-one should invent a prayer: “May our utility be maximised, and the invisible hand of the market keep us safe”.

And they might think they can remain safe. They know that the elite university economic departments banished the heretics some decades ago; they were certainly not letting them back in any time soon. Most economic teaching has continued in the same vain as if nothing has really changed in spite of a sustained and high profile student campaign for change.

The mainstream control recruitment and promotions based on publication achievement in top journals. And the top journals only publish mainstream analysis. There may be some pesky, whinging students but they move on and who listens to students. What do they know? So the OECD will be able to replicate itself with a steady stream of….. replicants.  Basically it all looks as safe as…… the Ancien Regime that commissioned serfs to build their elegant chateau.

The fly in the ointment for them is that the rest of the world is not staying still as political business as usual is swept away.  A growing number of the elite are even losing patience with the seeming self-serving nature of the mainstream economics profession.  Or maybe it is just too difficult to innovate when you have only been trained to think in one way.

Mainstream economists have hugely invested in an intellectual capital that could suddenly lose its former value.

The history of economies is littered with once dominant incumbents who failed to innovate in time to retain their position. Think IBM, Kodak, Nokia, Blackberry, ICI….  Disruptive innovation leaves companies with worthless or stranded assets.  Mainstream economists have hugely invested in an intellectual capital that could suddenly lose its former value.  Past reputations will suddenly not count for much.

So where are the potential disruptive innovators?  The answer is that if innovators (or heretics) have managed to remain in top universities, they are scattered across departments of politics, international development, pshychology, geography and even sociology and anthropology.  The exception that proves the rule at least in the UK is Leeds University, the only Russell Group university with a so-called heterodox economics department.

Many have left disciplinary departments and found homes in the lush and more accommodating corridors of business schools or the draughtier corridors of interdisciplinary research centres. The latter have to find much of their funding and are the first to lose out when things get tough.

Many have been relegated to universities with brands that aren’t quite M&S (or what M&S used to be). Under reforms in funding they are also now struggling to be solvent. For instance most of economists who gathered in Kingston University around Steve Keen, celebrated author of Debunking Economics, have now had to leave as Kingston struggles to survive.

So what to do? We are creating an alliance between those outside academia who have lost faith in mainstream economics, these scattered innovators and the student movement. We are going to do this by co-creating an accreditation system for masters courses that take a pluralist approach to economic teaching.

An accreditation system? The point of this is not to determine what economics is ‘right’ or which courses are ‘best’. It is to build a shared sense of what a pluralist approach is about. Our initial thinking from a group of key stakeholders is that it involves recognition of different schools of economic thought, cultivation of critical capacities in students and a focus on real world issues.

This is the opposite of the current approach where students are trained to think in one way. Their exams mainly require them to regurgitate the equations they have been taught and tick the right boxes on multi-choice questions. There is only one right answer for each question. This is what underpins the current group think.

There will be a range of views on what pluralism means, how courses should be assessed and the practicalities of such an accreditation system. We will use the latest techniques to support online dialogue to build on the initial thinking and create a truly internationally supported scheme.

Mainstream economics would see this accreditation system as using market forces to drive demand for a new brand of teaching. We would also look at it as building a new international club or institution.  By bringing people together under a common banner, we hope to legitimise and raise the profile of innovators, many in top universities, and the demand for what they provide. To date we have some very influential people supporting us, including the Chief of Staff of the OECD herself.

But please don’t leave it to the OECD to support us. Go here to get more information, add your support, get involved in the development of the scheme and tell us about any courses we have missed. If this is going to succeed we need to do it together.